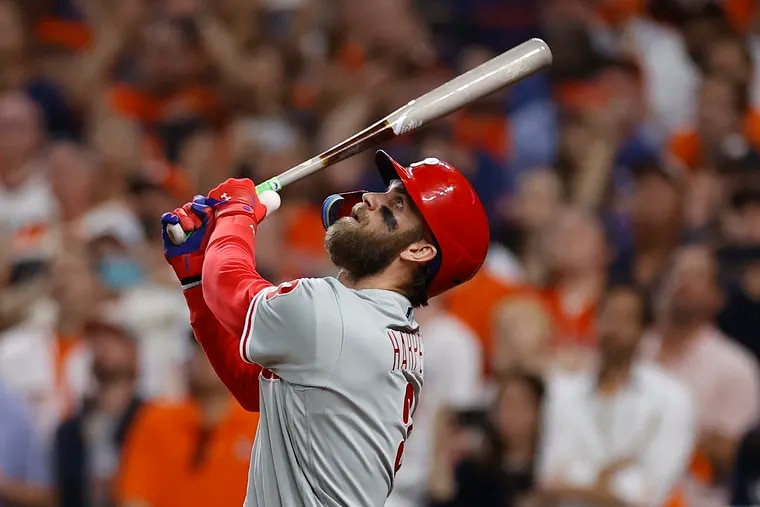 Phillies may have sponsored uniform patch this season

The Philadelphia Phillies could be sporting a sponsored patch on their jerseys this season, the first time the league has allowed advertising on uniforms. If a deal goes through, executives say it would likely be the team’s largest sponsorship aside from the 25-year, $2.3-million-a-year deal with Citizens for stadium naming rights.

The organization has been in talks with several different local, national, and international brands, said Jackie Cuddeback, the Phillies’ senior vice president for partnership sales and corporate marketing. Some of the potential sponsors are new names; others are existing marketing partners. The patch talks were first reported Wednesday by the Philadelphia Business Journal.

Such a sponsor would benefit from the visibility of a team coming off an exhilarating and unexpected World Series run, Cuddeback said, as well as the popularity of players like Bryce Harper and Trea Turner, both signed to long-term contracts.

“The teams with the biggest stars have shown the brands that they’ve signed the greatest return on their investment,” the senior vice president said. “There is a real opportunity for a brand to align with the Philadelphia Phillies and the stars that are a part of our team and will transcend sports for years to come.”

“There’s such incredible excitement around this team,” she added. “This is one of the safest bets a brand can make.”

Cuddeback declined to name the potential partners, specify how many companies the Phillies were in talks with, or put an approximate price tag on a possible deal.

Major League Baseball approved the addition of sponsorship patches last spring, with the upcoming 2023 season being the earliest a team could add the 4-by-4-inch patches to the left or right shoulders of players’ uniforms. The MLB Players Association has to approve all patches. Alcohol, betting, and media sponsors are off limits.

The MLB was the fourth professional sports league in the country to allow sponsorships on jerseys, following the NHL, the NBA, and the MLS.

The league’s addition makes for the most lucrative opportunities for brands, according to the sports and media analysts at Nielsen Sports. They estimated the average monetary value of live broadcast exposure received by an MLB jersey patch sponsor would exceed $12.3 million a season. By comparison, the value of NBA jersey sponsorship is about $2 million a season, the NHL $1.5 million, and the MLS $500,000.

Elsewhere in the MLB, the San Diego Padres already signed a four year, $9-million-a-year jersey patch deal with Motorola, according to the Sports Business Journal, while the Boston Red Sox locked in Mass Mutual with a 10-year, $17-million-a-year deal – or more depending on team performance.

In Philadelphia, Sixers jerseys include patches for the global cryptocurrency company Crypto.com, which last season replaced StubHub as the sponsor in a multiyear, eight-figures-a-year deal. International bakery company Bimbo has sponsored Union jerseys for more than a decade, with the team’s secondary jersey bearing the name of Bimbo’s Artesano brand as of 2020. The Flyers do not have a patch sponsor this season, the first one in which the NHL is allowing such marketing.

For the Phillies, there is no strict timetable for inking a jersey patch deal, she said, with the focus instead being on finding the right business match.

“We’re looking for a like-minded partner, somebody who values hard work and loyalty and obviously passion. There is nobody more passionate than Phillies fans, or Philadelphia fans for that matter,” Cuddeback said. “We’re not going to do a deal until we find a partner who feels right for the Phillies and who we feel right for from a brand perspective.”