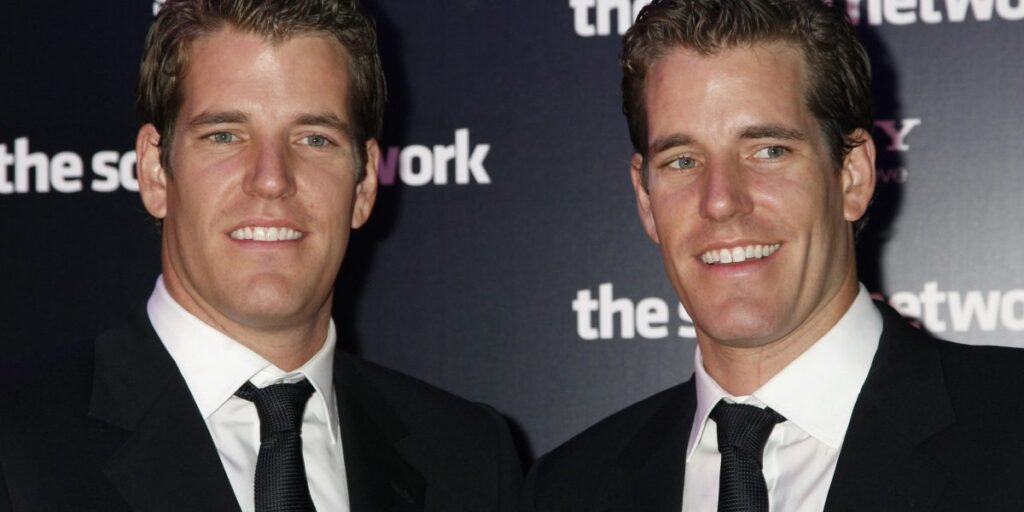 From Gemini to Genesis to Barry Silbert: The Winklevoss twins are in a big mess with crypto

The Winklevii—or Tyler and Cameron Winklevoss, to use their given names—first rose to fame in the mid-2000s when they sued Meta founder and CEO Mark Zuckerberg, claiming he had stolen their idea for Facebook when they studied together at Harvard. The 6-foot-5 brothers’ story was eventually detailed in the 2010 film The Social Network, including the part where Zuckerberg paid them millions to walk away.

Rowing fans might recognize the Winklevii from their sixth place finish in men’s pairs rowing at the 2008 Beijing Olympics, too, but in recent years, the brothers have been in the news for an entirely new reason: cryptocurrencies. The early Bitcoin adopters tapped into the digital asset boom of the early 2010s before launching a crypto exchange, Gemini, in 2014.

Tyler and Cameron Winklevoss compete on day one of the Beijing 2008 Olympic Games, Aug. 9.

By late 2021, Gemini was on fire and crypto prices were soaring to new record highs each day, leaving the identical twins with a combined net worth of over $7 billion. Industry analysts claimed that the party was just getting started, but after the Crypto Winter wiped out more than $2 trillion in value from the fledgling industry, the worm has turned for the Winklevii.

Now, lawsuits are pending and the brothers are engaged in a very public battle with their former friend, the crypto billionaire Barry Silbert, over what will happen to the frozen funds of more than 340,000 users of Gemini’s Earn platform.

Hundreds of thousands of people worldwide have been affected by Gemini’s recent issues, and none of it would have been possible without Facebook.

In the early 2000s, Cameron and Tyler had moved from their privileged upbringing in Greenwich, Conn.—their father is Howard Winklevoss, former professor of actuarial science at the University of Pennsylvania’s legendary Wharton business school—and were studying economics in the leafy confines of Harvard. Along with their classmate Divya Narendra, they came up with the idea for a social network called ConnectU to bring university students together and enlisted the help of a sophomore computer science major named Mark Zuckerberg to build out their site.

The Winklevii and Narendra alleged that Zuckerberg stole their idea to create Facebook. They sued in 2004, and after a legal battle that lasted four years, eventually settled with the Meta CEO for $65 million in mediation.

The brothers used their settlement money to invest in dozens of startups through their family office, Winklevoss Capital, and also made a timely investment in what was then a little known digital token, Bitcoin.

In April 2013, they revealed that they had invested $11 million in Bitcoin when it was trading at just $120. A year later, they launched a cryptocurrency exchange, Gemini, on the back of the investment, and everything was going according to plan until the Crypto Winter of 2022.

The birth of Gemini

In an interview with Fortune on the eve of Gemini’s launch, Tyler Winklevoss described how he hoped to lean into regulation in order to make cryptocurrencies accessible to retail investors, while also attracting the institutional crowd.

“Wall Street’s not in Bitcoin yet, and part of Gemini and the licensing is to get them there,” he explained.

The exchange grew quickly, barring a brief period of turbulence in the 2018 bear market, and developed a reputation as a secure U.S.-based option for crypto investors. The Winklevii became some of the first Bitcoin billionaires during Gemini’s rise.

But as the pair raked in a fortune while crypto fervor grew, they also began leaning into riskier investments. Gemini started NFT marketplace Nifty Gateway in 2018, but the platform quickly experienced security issues and was surpassed by the competition before being integrated into Samsung’s NFT platform.

In September 2021, Cameron Winklevoss also told Fortune about one—let’s call it, unique—investment into a startup that was attempting to revive woolly mammoths to combat climate change, saying that he saw the endeavor making money via television ads or “even parks for extinct animals, like Jurassic Park.”

Earlier that year, the Winklevii had launched their most important business yet, Gemini’s Earn platform. The crypto lending service offered juicy returns of “up to 7.4%” for depositing crypto, promising that customers could redeem their funds “at any time.” By comparison, the average savings account in the U.S. offers just a 0.2% return today.

“Today’s investors know that a smart, diverse portfolio includes crypto—it’s an investment in their future selves,” Tyler Winklevoss said in a press release at the launch. “We designed a program that allows our customers the ability to generate a real return on their crypto holdings without having to sell one of the best performing asset classes of the decade.”

Another victim of the Crypto Winter?

The only problem for Gemini was that in order to offer high returns to investors, the company needed to make relatively (or definitely) risky bets with their customers’ crypto. That’s not so difficult in a bull market, but when prices begin to fall, finding a stable return can be a challenge.

One of the ways Gemini created these returns was through Genesis Global Capital, the lending arm of crypto investment firm Genesis Global Trading, which is owned by Silbert’s Digital Currency Group. Gemini lent users’ funds to Genesis, which in turn loaned them out to institutional borrowers.

The Winklevii were confident that cryptocurrency prices would continue to rise, which would enable them to offer high yields to customers consistently through this plan. In September 2021, during the height of the crypto boom, Cameron Winklevoss even told Fortune that he believed Bitcoin would end the year at $100,000 (it was less than $47,000).

But when prices for cryptocurrencies tanked in 2022, it was a whole new world for Gemini and the Winklevii, and Gemini Earn users were particularly at risk. By June, Gemini was forced to slash 10% of its workforce. And just months later, reports surfaced that the firm would need to raise at least $1 billion to stave off bankruptcy for its Gemini Earn platform.

The issue was made even worse when Genesis decided to stop issuing redemptions to clients such as Gemini after the collapse of FTX—which was once the world’s second-largest crypto exchange. The decision meant that Gemini didn’t have the money to pay returns or redeem funds on their Earn platform.

In an open letter to Silbert this week, Cameron Winklevoss said that over 340,000 users have more than $900 million in crypto trapped at Silbert’s Genesis Global Capital, and in total Silbert’s companies owe Gemini $1.675 billion. He argued that Silbert was engaging in “bad faith stall tactics” to avoid paying back customers.

“The idea in your head that you can quietly hide in your ivory tower and that this will all just magically go away, or that this is someone else’s problem, is pure fantasy,” he wrote.

Silbert responded by saying that he did not borrow $1.675 billion, and that he “never missed an interest payment.” And some critics have argued that a collapse was inevitable owing to the unsustainable returns offered by Gemini. BlockFi, another crypto lender that offered high returns to investors, filed for bankruptcy in November amid the Crypto Winter and the collapse of FTX.

Yet Cameron Winklevoss said that he is trying to return funds to customers, but can’t because of Silbert.

“There you go again,” he said. “Stop trying to pretend that you and DCG are innocent bystanders and had nothing to do with creating this mess. It’s completely disingenuous.”

Winklevoss went on to ask if Silbert would commit to refunding $1.1 billion of what he owes by Jan. 8, but he got no response.

Now, Gemini’s Earn users are suing Silbert and the Winklevoss twins, alleging that Silbert breached his contract by pausing redemptions, and the Winklevii sold interest-bearing accounts without properly registering them as securities.

The Commodity Futures Trading Commission (CFTC) also filed a suit against the twins for misrepresenting the way their exchange and futures contracts operated back in 2017 when they sought regulatory approval.

Gemini’s main business, its crypto exchange, is meanwhile in danger of fading into irrelevance. The exchange’s spot trading volume over the past 24 hours was just $32.8 million. By comparison, the world’s leading crypto exchange, Binance, had volumes of more than $8.3 billion over the same period.