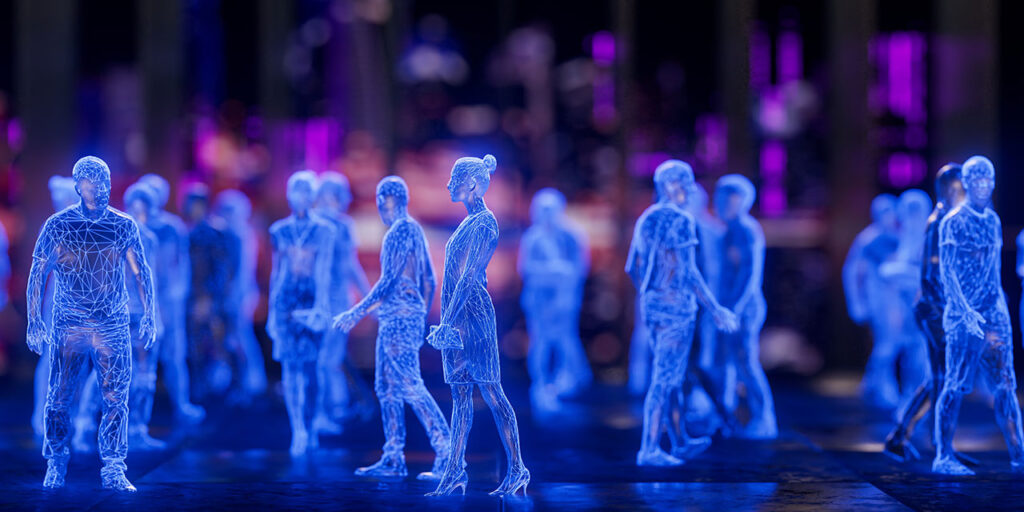 In a fateful October 2021 Facebook conference, founder and CEO Mark Zuckerberg announced that the company would henceforth be known as Meta. The change meant to reflect a new, permanent focus on connecting people in the metaverse, a concept that remains contested but generally refers to an Internet-driven universe that uses virtual reality (VR) and augmented reality (AR) to immerse users in computer-generated environments as digitally reimbodied avatars. Donning Meta’s Oculus VR headset might transport the user anywhere from a humdrum, pixelated conference room with coworkers to a concert with friends for which they’ve purchased tickets, or to fantasy worlds that unlock possibilities unknown in the physical domain. Zuckerberg heralded a near-limitless new realm, proclaiming: “You’re going to be able to do almost anything you can imagine.”

Yet more than a year after Meta’s abrupt rebranding, the metaverse remains inscrutable, its challenges great and its prospective benefits doubtful. The uncertain interoperability of different companies’ platforms threatens to fragment what is supposed to be a single, continuous user experience. Unlike Meta’s headfirst dive into VR, some competitors have prioritized AR, a non-immersive alternative that overlays digital elements in real-world spaces—such as applications that help shoppers see how a piece of furniture would look in the space captured by a smartphone’s camera. This October, Apple CEO Tim Cook, a proponent of AR, dampened expectations about the metaverse’s future, in part because of the concept’s slipperiness. “I’m really not sure the average person can tell you what the metaverse is,” he said. Others claim that the metaverse doesn’t exist yet. What’s certain is that the gambit hasn’t paid off for Meta’s shareholders, with the company’s stock down about 65 percent in 2022, well beyond the broader market’s drop.

But to those who embrace Zuckerberg’s immersive version, the metaverse signifies more than a business opportunity: it is the ultimate in utopian possibility, a chance to make good on Thomas Paine’s promise to “begin the world over again.” Unencumbered by the limitations of history, nationality, biology, and physical space, autonomous individuals can freely become whatever they wish at any given moment, subject only to the limits of innovation and a self-regulating marketplace.

Three decades ago, the emerging Internet represented a similar prospect. In a 1996 open letter to the world’s governments titled “A Declaration of the Independence of Cyberspace,” Electronic Frontier Foundation co-founder John Perry Barlow concluded, “We will create a civilization of the Mind in Cyberspace. May it be more humane and fair than the world your governments have made before.”

When Barlow wrote those words, the Internet was largely open for the taking by small upstarts. No single company or government controlled the competitive landscape or users’ expression. The Internet was decentralized, open to a panoply of networks and protocols, giving rise to hopes of a world where coercive force need not be exercised to achieve stability.

But in the years since, the promise of Barlow’s self-regulating utopia has not come to fruition. If the intractability of regulating content on massive platforms like Twitter has taught us anything, it’s that an ever-more immersive Internet, one that alters the perception of truth and falsity, reality and unreality, would present extraordinary and unprecedented regulatory challenges.

Under longstanding American law, the guarantee of free speech protects us only against government action. Except in narrow circumstances, private actors—including social media companies—are thus free to restrict speech and expression hosted on their property, and users are free to refrain from participating in the marketplace. Courts have repeatedly declined to designate Internet-based speech platforms as public forums, where the First Amendment would apply, though government officials’ use of social media accounts has already complicated the distinction. An immersive metaverse might digitally recreate the traditional public spaces—sidewalks, plazas, parks, and the like—where free speech is protected. Less straightforward parallels would no doubt create line-drawing challenges.

At the other end of these problems, the potential for unbounded individual expression presents its own worries. As in video games, metaverse users create their own digital personas, and others must accept the user in just the way he wishes to be perceived at that moment. Unlike in the physical world, where one’s claims about oneself are subject to the scrutiny of others’ mental and sensory assessments, the digital embodiment, accentuated via microtransaction purchases, may be all that other users ever see—never the flesh-and-blood human behind it. The ability to reconfigure personal identity at whim effectively imposes each person’s self-construction on everyone else in the metaverse, a prospect made more unsettling as virtual interactions increasingly supplant physical ones.

This individual autonomy will not inexorably yield better individuals. Instant gratification undermines the critical virtues of fortitude, the commitment to pursue goods despite their difficulty, and temperance, the resolve to abstain from pleasant but harmful things. Gone is the arduous process of self-mastery that comes with striving toward excellence despite adversity; gone, too, are the profound emotional and personal connections enabled by physical, face-to-face encounters. We risk trading a complete and fulfilled human life—made possible by hard lessons and often-troubled relationships—for a dopamine-fueled virtual alternative.

At bottom, the metaverse speaks to a longing as old as the human experience: to escape this flawed world for a better one. Our problems appear insurmountable and our divisions unbridgeable. The metaverse’s fantasy and safety unsurprisingly seem attractive to many, especially after three weary, chaos-filled years of illness and riot. And in a secularized culture that largely ignores or denies the possibility of an afterlife, or relegates it to purely private belief, the metaverse promises a technological vision of heaven—this one available immediately and without sacrifice. Non-human personhood, once reserved for angels, will be available to all, for a price. But chances are, the purchase won’t buy happiness.

John Ketcham is a fellow at the Manhattan Institute.

City Journal is a publication of the Manhattan Institute for Policy Research (MI), a leading free-market think tank. Are you interested in supporting the magazine? As a 501(c)(3) nonprofit, donations in support of MI and City Journal are fully tax-deductible as provided by law (EIN #13-2912529). DONATE
Share. Facebook Twitter Pinterest LinkedIn Tumblr Email