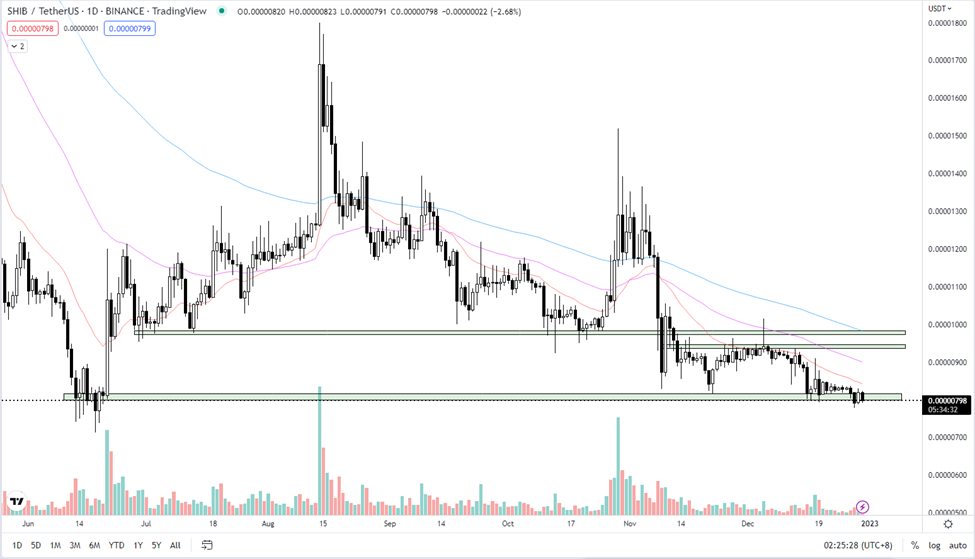 Is it Too Late to Buy Shiba Inu? Crypto Experts Give Their 2023 SHIB Price Predictions

In recent years, the cryptocurrency space has seen a surge in the development and distribution of so-called “meme coins,” which have often been met with skepticism and accusations of being crypto scams. Despite the critics, these coins have managed to defy expectations by outperforming many large-cap coins and creating obscene wealth for some of their holders (while losing just as much money for others). The success of meme coins has been highlighted by the astronomical rise of Dogecoin (DOGE) and Shiba Inu (SHIB).

While it was a challenging year for the cryptocurrency market, Shiba Inu held its ground and secured its spot among the top digital currencies in 2022. Shiba Inu holds 15th place when ranked by marketcap, at an impressive $4.39 billion.

Shiba Inu’s price sits at $0.00000798 as of writing, testing the levels where it began its 108% Q3 run back on June 21, which topped out on August 14. Investors are looking for a potential bottom in SHIB as the financial and risk asset markets look to recover in 2023.

Daily Exponential Moving Averages (EMA) are still bearish as prices are trading below the EMA 20, EMA 50, and EMA 100. A sign of a trend reversal would be for the price to break these key resistance levels on the daily timeframe and for the EMAs to rearrange themselves in a bullish alignment.

The Relative Strength Index (RSI) for SHIB is currently at a low of RSI 38.67–below the key level of RSI 40. To suggest an exit from this bearish period, the price must break past both the RSI 40 and 50 resistance levels to point to a potential trend reversal.

The SHIB Moving Average Convergence Divergence (MACD) has attempted several unsuccessful bullish crossovers over the past few days. As observed from the histogram, both the MACD and signal lines are so close to each other that it could suggest a move is due in the near future.

Shytoshi Kusama, Shiba Inu’s lead developer, has confirmed that the launch of the Shibarium protocol, a blockchain scaling solution that could drastically change SHIB’s position in the cryptocurrency industry, is “very soon’”

The news comes following a successful meeting between Kusama and UnificationUND, key builders of the Shiba Inu ecosystem. Investors are optimistic ahead of this major launch, and there is hope that it could significantly drive up SHIB’s price by early 2023. With such a hotly anticipated move on the horizon, investors should keep a close eye on developments in the days and weeks to come.

As we’ve seen with the potential impact of the Shibarium protocol on Shiba Inu’s price, it’s important to consider the fundamentals of a cryptocurrency project when making investment decisions. With that in mind, let’s turn our attention to some other altcoins that have good foundations and show promise for returns in the future.

Other Top Altcoins to Invest In

After conducting thorough research, we have identified three other promising cryptocurrency projects with solid development teams, high interest from investors, and a potential for returns to diversify your investments.

The FightOut project, which is expected to be a highly sought-after crypto project in 2023, is currently offering its FGHT token for sale during its presale. What sets FightOut apart from other projects is its focus on overall physical fitness rather than a focus on only one or two aspects of fitness such as the number of steps taken in a day. The project is based on a “move-to-earn” (M2E) model, in which users can earn both physical and virtual rewards for increasing their fitness levels through a network of physical gyms. The app will also provide access to personalized workouts with videos from fitness coaches.

With these workouts, users won’t just be looking to work on their physical physique–the app will also help build strength, cardio endurance, and technique through fitness programs and an online supportive community. It will also offer support in preventing injuries related to boxing and MMA sports. Users will be able to monitor their progress with avatars representing how far they’ve come in real life.

FightOut’s reward system will keep users coming back as they earn REPS tokens for completing workouts and winning competitions. These rewards allow users to purchase training gear, coaching sessions, FightOut merchandise, and other items within the app. In addition to this feature, the avatar–an unchangeable NFT known as a “soul bound” token–will get fit along with users as they progress in their fitness journey. Users can then compete with their avatars in the metaverse of FightOut with others through league tournaments.

FightOut’s FGHT cryptocurrency will be used to purchase subscriptions, enter tournaments, and acquire REPS points. As an athlete accumulates more REPS points, they will increase their earning potential in future tournaments.

FightOut is offering its token presale after having raised $1 million in their private sale within a week’s time and has topped $2.5 million in the presale thus far. 60% of 10 billion FGHT tokens will be available to purchase during the ongoing event, with an expected return of up to $100 million for FightOut. Early investors can snag bonuses of up to 50%, so if you’re thinking of taking a position, get in early before the end of round 1, which is quickly approaching.

Dash 2 Trade will be released in early 2023 and is considered by many to be the future of crypto trading. Dash 2 Trade stands out from other platforms with its comprehensive suite of features and community, providing traders with unprecedented insight and a high level of control over their investments. With the rise of scams like FTX, Dash 2 Trade provides tools to help investors to thoroughly vet projects, setting them up for successful positions and secure profits.

While the platform will help novice traders make smart decisions, it will also give more experienced traders the ability to refine their strategies as well as benefit from automated trading through APIs. Dash 2 Trade’s presale token scoring system also provides an additional layer of confidence for all investors to get into the most promising token presales early.

In short, Dash 2 Trade could revolutionize crypto trading with its advanced analytics, real-time sentiment monitoring capabilities, and automated trading features. Another promising aspect of the platform is that the company has built a strong community around its platform already since they’re the same people behind the Learn 2 Trade community of over 70,000 traders around the world. The company is always looking for input from users, so the interface is expected to be world class when it launches.

Dash 2 Trade’s presale is coming to a close, with only a little over 6 days left and 13% of tokens still up for grabs. The team has surpassed their development milestones ahead of schedule and will soon be releasing the public Dashboard, with an expected launch of the platform in early 2023. So far the presale has raised over $11.6 million in funding, setting it up for a comfortable runway, especially considering how far the project has come already.

C+Charge is an innovative blockchain-based rewards app and peer-to-peer payment system for electric vehicle (EV) charging stations. The goal of C+Charge is to make EV charging more accessible–while also allowing users to earn carbon credits for their contribution to the environment, and providing a single payment rail that eliminates fees and waiting times associated with traditional payment systems.

Additionally, its platform will make it possible for users to see exactly how much their charging session will cost, helping to reduce the cost of charging and making it more transparent for EV owners.

C+Charge is also a tool that can be used by landlords and businesses looking to install charging stations at their properties. The platform makes it easy to keep track of energy consumption for each electric vehicle, allowing drivers to be charged appropriately for their own electricity usage, thus incentivizing landlords and businesses to provide more charging solutions.

Overall, C+Charge offers a powerful use case for blockchain technology that shows just how valuable crypto can be in the real world. By providing EV owners with an easy way to earn rewards, save money, and learn something about their EVs along the way, C+Charge is making a positive impact on both people and the planet. With its innovative platform and commitment to making EV charging easier, faster, and cheaper, C+Charge is well-positioned to become an important player in the EV charging industry.

At the moment, you can purchase CCHG tokens during their presale for an introductory rate of $0.013 USDT each. The presale will happen in a four-staged pricing progression, culminating in its end price of $0.02350 per token.