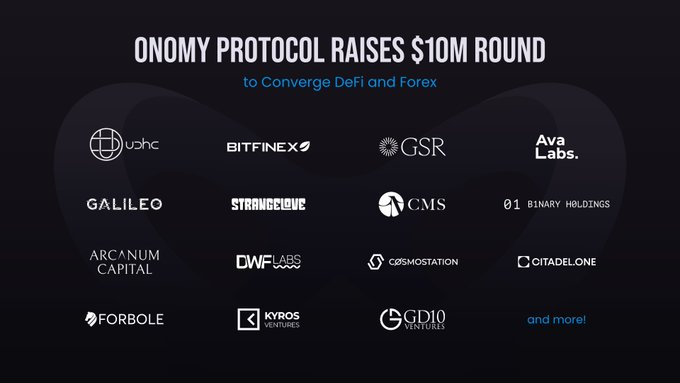 Despite the prolonged bearish cryptocurrency market, Onomy has completed a $10 million funding round as it nears launch. With major investors Ava labs, GSR, Bitfinex, Galileo, and Arcanum Capital coming on board,  the company is set to accelerate its forex markets and DeFi converging operations. Needless to say, Onomy’s crowdfunding success stamps a statement of the builders’ crypto market.

We’re thrilled to announce that we’ve closed a $10M round, getting Onomy closer to its goals of converging DeFi & Forex while rearchitecting the Web3 user experience.

Onomy is developing a unique protocol to serve as the critical interface between traditional forex markets and the decentralized exchange (DEX). Onomy’s protocol runs on the Cosmos blockchain, undergoing essential developments since 2020.

The DeFi and forex markets converge process by Onomy is set to draw an array of events. It is set to offer a blockchain bridge within the layer 1 blockchain network built on the cosmos blockchain. This will be coupled with Onex, a decentralized exchange network, and a non-custodial wallet.

Lalo Bazii, Onomy’s co-founder, has stated that the $10 million crowdfunding has been secured through a simple agreement for future tokens (SAFT) model. He insists that the company doesn’t have a lead investor but a group of interested parties working together to achieve a common objective. Such commitment is critical as Onomy’s is set to go live on the mainnet.

Onomy to be Live on Mainnet

In the coming few days, Onomy is expected to be fully integrated and operational in the mainnet. This will serve as a real test for the co-founders and investors. The company is set to bring in more developers in addition to the 15 that exist currently.

Onomy’s recently conducted testnet recorded over 40,000 new users and 800,000 transactions. Onomy native token (NOM) holders are expected to have voting power on the company’s decisions during the mainnet launch.

The mainnet launch will see the cosmos-based network convert to a decentralized autonomous organization (DAO).

What’s Next for Onomy?

Onomy has reported that the progress undertaken by the developers is exciting and substantial. The Onomy Network (Layer 1 infrastructure) and Crypto-Universe-Onomy Network bridges are ready and set. Additionally, several cross-chain and multi-chain network deployments have happened. Notably, Cosmos, Polygon, Ethereum, Avalanche, Harmony, and Aurora have all been integrated with the rest following soon.

Onomy is DAO! The company has finalized DAO development, a compulsory module in the cosmos blockchain set to govern treasury funds. Meaning total decentralization, as no one can access the module’s private keys.

Onomy has expressed the possibility of more partnerships as it thrives to achieve the decentralized finance (DeFi), forex markets converger. Leveraging on the existing collaboration with key players in the blockchain environment, the company believes these partnerships will accelerate their efforts significantly.

Despite the turmoil in the crypto industry following the FTX saga and the dwindling crypto market, Onomy is leveraging the builder’s market to prosper. Undoubtedly, Onomy is a promising project expected to cement itself among the big boys in the crypto-blockchain space.