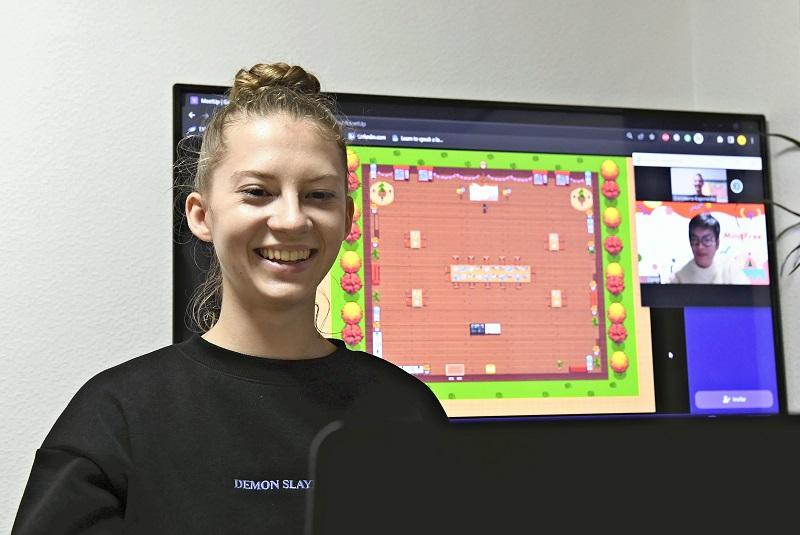 Elizaveta Korotkova, 23, a web designer who fled from a Kyiv suburb to Nagoya following the Russian invasion of Ukraine, has created a venue in the metaverse, a virtual environment on the internet, for Ukrainians in Japan to job hunt. The venue will be used for a job fair to be held on Friday, where participants will be able to exchange information with Japanese companies using their avatars as they seek to find jobs in their desired industries.

Korotkova lived with her parents in Irpin, a town northwest of Kyiv. After having to take shelter in an underground parking lot when her apartment was shelled, she came by herself to Japan in March, relying on a friend.

Before the invasion, Korotkova had been studying computer graphics and law at a graduate school while working as a web designer under contract with a French company, creating websites for world-famous fashion brands and others. Unable to continue the contracts with her clients since coming to Japan, she has been doing one-off jobs such as for graphic designs while attending a Japanese language school.

Daniel Leung, 46, president of MindFree Inc., an IT company in Osaka, conceived together with his team the idea of using the metaverse to help Ukrainians find jobs. Leung, who is from Hong Kong, felt that there was a need for support measures to help Ukrainians find work in Japan. “I thought that the metaverse would allow us to interact with each other without being conscious of [race, appearance, etc.],” he said.

In response to Leung’s request, Korotkova created a restaurant-style virtual space. She placed a large table in the center to allow many people to talk together at once, and added smaller tables for smaller groups. She paid close attention to details, such as in decorating the space with flags of Ukraine and Japan and placing trees red and orange with fall foliage outside, to create an atmosphere conducive to discussion among the participants.

According to Korotkova, Ukrainians she knows in Japan work in restaurants and factories. “Even if they are skilled IT workers, they are rarely hired for the jobs they want because of the language barrier and their lack of qualifications in Japan,” she said.

The fair will be conducted in English and is free of charge. Up to 15 companies and 20 displaced Ukrainians can participate. “I hope that the displaced people will be able to get the jobs they want,” said Leung, adding that his team is considering holding subsequent fairs.

For applications and inquiries about the fair, email MindFree (pr@mindfree.co.jp).