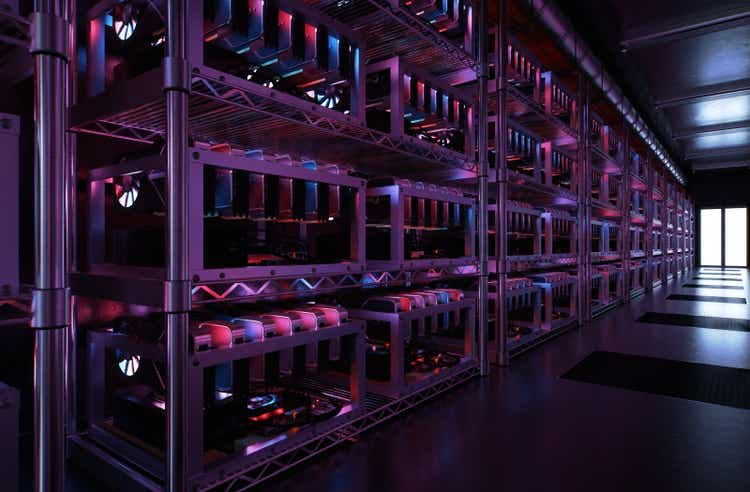 A few months ago, I wrote a cautious article on HIVE Blockchain Technologies Ltd. (NASDAQ:HIVE), highlighting some red flags in the company’s Q4/2022 earnings report. In particular, I was worried that HIVE’s Ethereum (ETH-USD) mining equipment may become obsolete with a pending transition to a “Proof-of-Stake” (“POS”) system. I was also worried about HIVE’s mining margins, as HIVE had been mining at negative gross margins in Q4/2022. Since my article, HIVE has declined over 30%.

After reviewing the latest figures from HIVE’s monthly production reports and cryptocurrency prices, I continue to recommend investors stay away. At current crypto prices, HIVE appears to be mining at negative gross mining margins, i.e. not even covering the cost of electricity. The loss of Ethereum mining has dealt a heavy blow to HIVE’s operations. Combined with increased Bitcoin (BTC-USD) mining difficulty, HIVE’s monthly production of BTC has declined 40% from August to October despite adding 7% in ASICs.

Ethereum Merged And Its Impact On HIVE

When I wrote my initial article, there was still quite a bit of doubt about the pending Ethereum conversion to POS. In fact, HIVE itself had been downplaying the timeline and impact, with the company making fun of the long delayed transition in their Q3/F22 presentation (Figure 1).

As a reminder, HIVE had 6.49 Terahash of Ethereum mining capacity at the end of August, which produced 3,010 ETH (equivalent to 228.4 BTC, according to HIVE). HIVE also mined 290.4 BTC in August, using their dedicated ASIC miners, so in total, the company produced 518.8 BTC equivalent.

In response to the Ethereum Merge, HIVE commented that the company would be pivoting its business to focus on Bitcoin, including the digital treasury assets (i.e. it would no longer HODL ETH). Since the merge, HIVE revenues from GPU mining were dramatically reduced, from ~7 BTC/d to 1.6 BTC/d, as the GPUs were converted to mine alt-coins.

In October, the 1st month of BTC only mining, HIVE mined 262 BTC from ASIC mining and 45 BTC from GPU mining for a total of 307 BTC.

So as a result of the Ethereum merge, HIVE’s BTC equivalent mining production declined by over 40%, from 519 BTC in August to 307 BTC in October.

Bitcoin Difficulty Continue To Climb; HIVE Running On A Treadmill

Further compounding HIVE’s Ethereum problem was the fact that the difficulty to mine Bitcoin continued to climb, recently pushing new all-time highs despite the fall in Bitcoin prices (Figure 2).

What Is HIVE’s Margin Now?

Revisiting my concern on HIVE’s margin profile, admittedly, I was too bearish in my prior article when I pointed out HIVE was mining at negative gross margin in Q4/F22, as a number of one-off expenses had inflated operating and maintenance expenses. In the first quarter results reported in August, Gross Mining Margin expanded QoQ to 61%, as operating and maintenance costs normalized somewhat to $17.2 million. However, I was directionally correct, as HIVE’s Gross Margin, which included depreciation of mining equipment, was only 3% in Q1/F23 (Figure 3).

Looking forward, we are at an interesting juncture. On November 9th, Bitcoin crashed to ~$17,000 as one of the seemingly ‘untouchables’ of the industry, FTX, was forced to seek a bailout from its main rival, Binance.

What is interesting is that, if we assume HIVE’s Q1/F23’s operating and maintenance costs are the norm, that works out to a daily mining cost of ~$190k ($17.2 million over 91 days). From the October production update, we also know that:

Therefore, it is very possible that HIVE is currently mining at a negative gross mining margin. This would mean mining revenues cannot even cover the electricity costs.

Obviously, the biggest risk to my bearish view is going to be cryptocurrency prices. In August, following my last article, HIVE briefly topped $7/share as risk assets had a summertime rally. However, I think over the long run, HIVE cannot escape from the reality that at current crypto prices, its mining gear may be basically burning energy and money as it mines at negative gross mining margins.

In summary, I continue to be wary of HIVE. At current crypto prices, HIVE appears to be mining at negative gross mining margins. The loss of Ethereum mining has dealt a heavy blow to HIVE’s operations. Combined with increased BTC difficulty, HIVE’s monthly production of BTC has declined 40% from August to October despite adding 7% in ASICs.