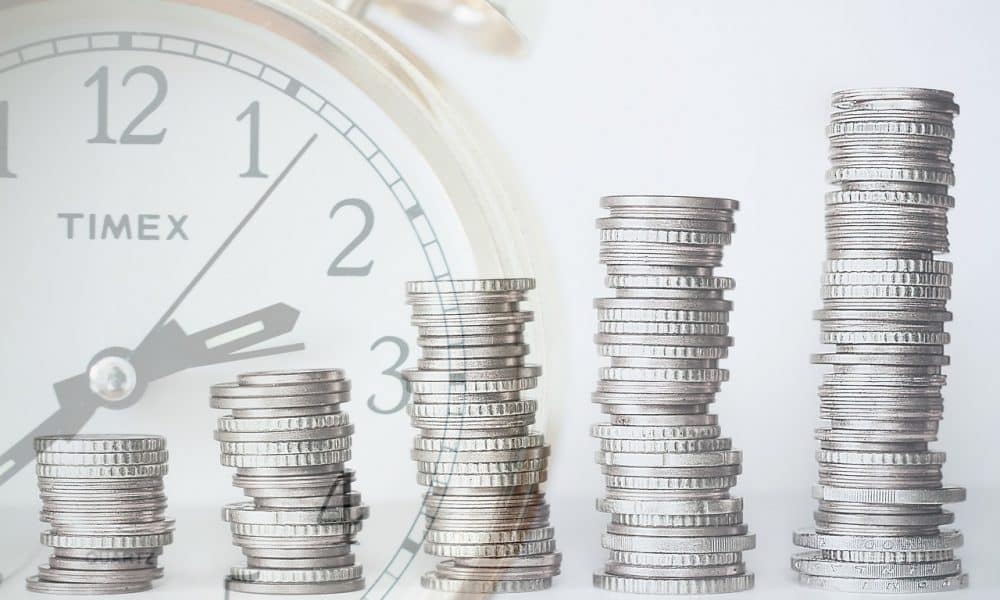 Disclaimer: The datasets shared in the following article have been compiled from a set of online resources and do not reflect AMBCrypto’s own research on the subject.

Solana (SOL), the ninth-largest cryptocurrency in the world, was founded two years ago. It has gradually grown into a formidable competitor to Ethereum in the cryptocurrency market. Solana had risen more than 12,000% since its initial introduction in 2020 when it was trading for less than $1. It reached an all-time high of $258.93.

In a September 2022 interview with Bloomberg Technology, Solana co-founder Anatoly Yakovenko stated that the recent Ethereum merge has undoubtedly affected the cryptocurrency market.

Solana, however, processes more user and app transactions per day than the combined total of all Ethereum-based blockchains.

Its increasing popularity can be assessed by the fact that popular American comedian and television host Steve Harvey also joined the bandwagon. He did so when he changed his Twitter profile to that of a Solana Monkey Business NFT in September last year.

American singer Jeson Derulo tweeted about his excitement for the token last year, saying that he betted on Solana and enjoyed the ride.

Solana has raised around $335.8 million over 9 funding rounds, with Alameda Research, Andreessen Horowitz and Polychain being its leading investors.

The current year so far has, however, proven to be highly volatile for all cryptocurrencies and Solana didn’t escape this brunt either. So far, its maximum price this year has been $136.38, dated 3 April. Solana’s blockchain was recently hacked and thousands of users reported losing their funds worth around $8 million.

In early August this year, thousands of Solana accounts were drained. The Solana Foundation, however, told the Financial Times that it “does not appear” that the exploitation had affected its core infrastructure, but rather was caused by a bug “in software used by several wallets popular among Solana users.” American cryptocurrency billionaire, Sam Bankman-Fried, the CEO of the FTX exchange, said in an interview with Fortune that SOL is the most “underrated token right now … at least as of a month ago.” He added that though the Solana system exposed itself to many vulnerabilities, it has continued to push boundaries and this is what blockchains need to do in order to grow.

Cryptocurrency VC fund Cyber Capital’s Justin Bons is however not as enthusiastic as SBF. He tweeted that Solana has far too many red flags such as multiple downtimes.

The Solana network is currently one of the best places to explore NFTs and DeFi apps. Billionaire entrepreneur Reid Hoffman, better known as the co-founder of LinkedIn, announced on Twitter this July that he is releasing a series of Solana-based NFTs based on images created using OpenAI’s DALL-E 2 AI software. He added that he would auction the first piece starting on Magic Eden, the largest Solana NFT marketplace. Magic Eden is the leading NFT marketplace on Solana. Its focus on the artistic community, availability of simple tools, and the diversity of tokens created and offered to make it a force to be reckoned with in the NFT community.

Essentially, Solana has emerged as a paradigm for other blockchains looking to grow.

Why these projections matter

Today, Solana is one of the fastest-growing cryptocurrencies in the market with almost 100 billion transactions so far. The average cost of a transaction on the platform is $0.00025, making it one of the most economical altcoins in the crypto universe. With 1,850 validator nodes, it claims to be one of the most secure blockchain networks too.

The Solana Foundation has announced that a total of 489 million SOL tokens will be released in circulation. Currently, there are a little under 300 million tokens already in circulation.

Today, it is the 9th largest cryptocurrency in the market, with a market capitalization of $11.7 billion. The Solana blockchain has eight features, including PoH, Cloudbreak, and Sealevel. Thanks to its high speed and low cost, Solana has successfully attracted the interest of both retail and institutional investors across the globe. Solana promises to its customers that there shall be no increased fees and taxes. Its low transaction fees don’t compromise either the scalability or processing speed of the protocol.

What is unique about the Solana blockchain is that it is the first platform to adapt the “proof of history” mechanism for crypto mining. A 2017 white paper published by Yakovenko detailed a timekeeping method that he called proof of history. The paper argued that the long time needed to reach a consensus over a transaction on conventional blockchains such as Bitcoin and Ethereum has acted as a barrier towards the scalability of these projects. To counter this challenge, the paper suggested a new method of consensus – proof of history – that creates a ledger recording events as and when they occurred.

The validation process on Solana is done through an innovative combination of proof-of-history and proof-of-stake consensus mechanisms, attempting to win over the twin issues of security and scalability as had been faced by the Ethereum network.

What is unique about the Solana blockchain is that it is the first platform to adapt the “proof of history” mechanism. Its innovative approach to technology has gained significant traction in the market. Ergo, investors must be well aware of its previous performance, current market sentiment, and future predictions.

In this piece, we shall closely observe the key performance parameters of Solana, with particular emphasis on its price, market cap, and volume. We shall also summarize the predictions of the world’s most popular and reliable analysts, besides the Fear & Greed Index to assess future projections.

After an extremely successful performance last year, the cryptocurrency market began tumbling in 2022. From around $178 in early January, SOL’s price fell to as low as below $80 in mid-March. In early April, it breached the $135-mark before again continuing to fall lower and lower.

Market conditions got better in April, briefly, before they plummeted yet again.

Messari’s James Trautman recently published a report that analyzed the state of Solana in the second quarter of 2022. With volatility prevalent across metrics in Q1, Solana completely crashed, in line with all the other cryptocurrencies in Q2. The macroeconomic conditions worsened for the industry as tighter regulations kept coming into place and we witnessed the $60 billion collapse of terraUSD and LUNA.

The report also mentioned that Solana is one of the leading blockchains when it comes to NFT transactions. Currently, it is home to Solanart, Metaplex, and Magic Eden, among several other NFT marketplaces. Therefore, a rise in this asset class could conversely affect the price and volume of its native cryptocurrency as well.

We must understand that experts’ predictions vary a lot. Each analyst weighs upon a specific set of factors to forecast the market and different currency metrics. These analysts study the previous market trends as well as future speculations and then arrive at their predictions. It is therefore self-evident that market predictions significantly vary. Even then, unexpected technological and economic changes keep interrupting the market wildly, thereby influencing currency metrics.

Let us now look at what different crypto analysts have to say about Solana’s future in 2025.

Finder’s panel of experts also had some predictions to make. According to the panel, SOL can be expected to hit the $166-mark by 2025. It’s worth pointing out here that these predictions were made just last month. On the contrary, the panel’s January 2022 predictions claimed SOL will go as high as $486 in 2025.

DigitalX’s Alex Nagorskii has been particularly bullish about the cryptocurrency, claiming,

“Solana have implemented several promising protocol updates which appear to have reduced outages in the short term. It remains to be seen if the stability will persist. Solana has captured significant portions of the NFT market from Ethereum and remains a decent competitor in the L1 race.”

Predicting markets 8 years down the line is very speculative; it is anyway speculative even for a shorter period. Many noted crypto-analysts and commentators have nonetheless forecasted Solana’s metrics for 2030.

In fact, Fortune reported that FTX CEO Sam Bankman-Fried recently said that SOL is the most “underrated token right now … at least as of a month ago.” He added,

As far as 2030 is concerned, Finder’s panel predicted that SOL will go as high as $512 in 2030. As was the case for 2025, the panel’s January predictions were very different from its July predictions.

Panxora Hedge Fund’s Gavin Smith is of the opinion that,

“SOL is one of the leading contenders in the smart contract blockchain space. They are likely to be one of the chief beneficiaries if the Ethereum upgrades fail to deliver lower transaction fees.”

It wouldn’t be right to not mention the fact that the Solana Network is prone to outages and has been so for a while now. Will these outages continue and are they likely to have an impact on SOL going forward? Well, it’s perhaps too soon to say. According to Bitwave’s CEO, however,

“… keeping an eye on Solana, but it’s the only blockchain that regularly has major outages, which just isn’t doable for a financial technology.”

In fact, over 65% of Finder’s panelists believe Solana’s Network will continue to see more outages in the future.

Solana has nonetheless continued to implement solutions to enhance its network stability and reliability. It also focuses on expanding its market ecosystem, with the adoption of NFT marketplaces, EVM compatibility, promotion of Solana Pay, and the introduction of Solana Mobile. Today, it has gained currency among the decentralized finance (DeFi), non-fungible tokens (NFT) marketplaces, and gaming communities.

That being said, it’s important to note that very recently, the Solana-based DeFi exchange Mango Markets was hit with a reported exploit of over $100 million through an attacker manipulating price oracle data, allowing them to take out under-collateralized cryptocurrency loans.

Soon after, the exploiter revealed his identity on Twitter, referring to his actions as “a highly profitable trading strategy.” Avraham Eisenberg explained his actions, saying that their “actions were legal open market actions, using the protocol as designed, even if the development team did not fully anticipate all the consequences of setting parameters the way they are.”

“We’re still in the Wild West days of Web3. As the crypto ecosystem grows, so has the number of bad actors looking for ways to steal users’ funds. The rapid growth in popularity of NFTs has led to an increasingly prevalent method of attack for scammers – Spam NFTs,” the Solana blog post said.

Investors should keep in mind that the financial market remains highly volatile, in particular, the cryptocurrency market even more so. Neither individual nor AI-driven analysts can foresee unexpected forces, and their predictions can very likely go wrong. It is for this reason that you should conduct your research and invest sensibly.

At press time, the Fear and Greed Index for Solana was flashing a ‘greed’ signal to the community. 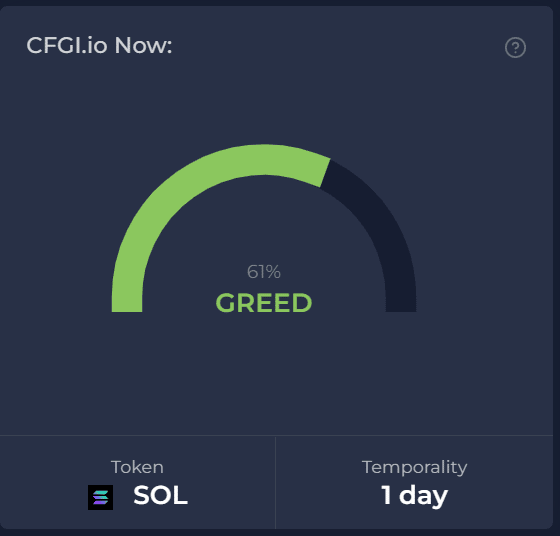