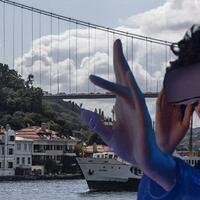 Türkiye is living a “metaverse winter” as the thrill of buying lands on the metaverse has passed, experts have said.

“Those who saw the metaverse as an investment tool and were affected by the rapid depreciation of the market lost their faith in it,” said Levent Eraslan, the head of the Social Media and Digital Security Research Center (SODİMER).

There has been a decline in interest in the concept of a metaverse in Türkiye in recent months, according to Eraslan.

“However, it is necessary and important to correctly understand the concept of the metaverse, which is also described as the digital big bang and which is thought to start a new era, define many ecosystems of the future and determine the philosophy of this world,” Eraslan warned.

The expert stated that Metaverse offers a market opportunity that cannot be ignored with the potential to generate a value of up to $5 trillion by 2030.

The reduction of the concept of metaverse to environments where we connect with virtual reality glasses or to land purchase and sale transactions in the metaverse world leads to alienation from the concept, according to Eraslan.

“The metaverse winter in Türkiye is worrying.”

The concept’s falling off the agenda is called the “metaverse winter.”

The reasons for the “metaverse winter” were determined by taking the opinions of the members of the Türkiye Metaverse Platform, said Tuğba Yulet Yılmaz, the vice president of SODİMER.

“As the pandemic wanes and people turn to face-to-face work and socializing, interest in the metaverse has also been in a downward trend as the need for virtual spaces has diminished,” she stressed.

There is a large segment of people who consider the Metaverse as selling virtual land and making money, Yılmaz said, adding that they have moved away from the concept with the negative atmosphere in the crypto market.

“People may be tired of hearing and seeing the term metaverse all the time and see these terms as overhyped marketing terms,” she added.

Meanwhile, another reason was that as inflation peaked, many companies cut their spending, she said. “In the summer period, the decision mechanism of the companies stopped.”

Metaverse, which is called “the future of the internet,” enables people to meet on virtual world platforms. The social media network company Facebook, which launched a VR world called “Facebook Horizon” in 2019, renamed the company “Meta Platforms,” declaring attempts to develop a metaverse ecosystem.

The term “metaverse” has its origins in the 1992 science fiction novel “Snow Crash” as a portmanteau of “meta” and “universe.”

Türkiye will embark upon models to integrate the metaverse and augmented reality with education, especially in vocational schools, Education Minister Mahmut Özer said on March 25.