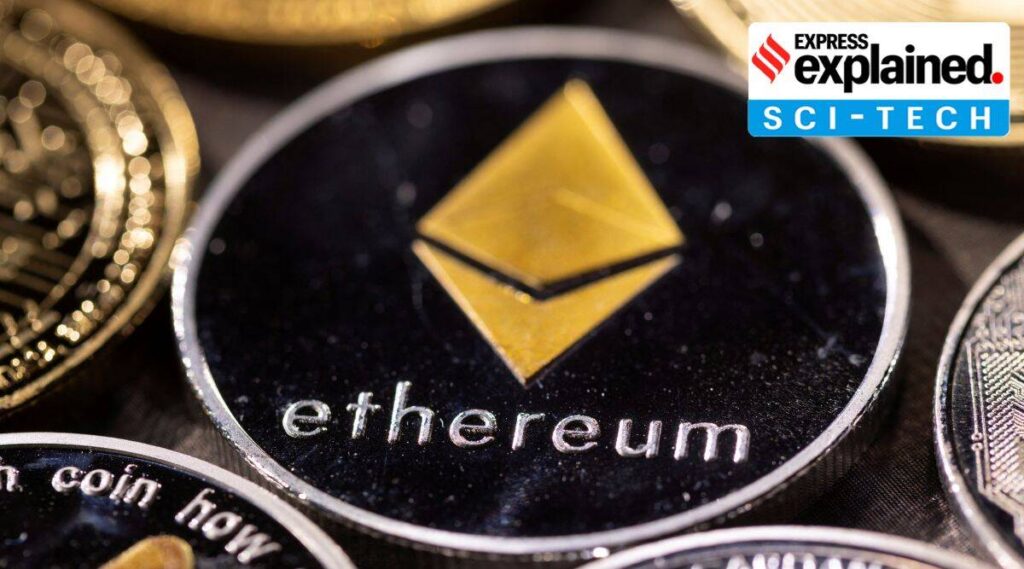 The significance of Ethereum Merge and its impact on blockchain architecture

Ethereum, the world’s second most valuable cryptocurrency, has completed a significant software overhaul which promises to ramp up security of the cryptocurrency while claiming to cut down on its carbon footprint, nearly entirely.

The revamp, known as ‘The Merge,’ will cast aside the need for crypto miners and gigantic mining farms, who had previously driven the blockchain under a mechanism called ‘proof-of-work’ (PoW). Instead, it has now shifted to a ‘proof-of-stake’ (PoS) mechanism that assigns ‘validators’ randomly to approve transactions and earn a small reward.

The move to PoS will reduce ethereum’s energy consumption by nearly 99.95 per cent, according to the Ethereum Foundation, a non-profit organisation dedicated to supporting the cryptocurrency and its related technologies.

What has exactly changed?

Ethereum is a decentralised cryptocurrency, meaning that it does not have institutions like banks approving the transactions that happen on its network – the approvals were earlier happening under the PoW consensus mechanism which was essentially done by miners. Miners would compete to solve complex mathematical puzzles using a massive infrastructure of cutting edge computer hardware, and the first one to solve the puzzle would be chosen as the validator. This method was almost entirely dependent on crypto farms, which are massive warehouses lined with rows of computers which would solve the puzzles.

There was, however, one big problem – these mining farms were energy guzzlers, leading to one of the biggest criticisms of the crypto industry that they sometimes consumed more electricity than entire countries, and were therefore a big concern in terms of environmental sustainability.

Enter ‘The Merge’ and the shift to the PoS consensus mechanism. Ethereum is still a decentralised platform, but under the new concept, it would not need miners and mining farms to authenticate transactions anymore. Instead, a validator will be randomly assigned using an algorithm from a pool of people who ‘stake’ their coins, which essentially means pledging at least 32 Ethereum tokens on the network. This would entirely eliminate the need for miners on the Ethereum network.

Why is the ‘Merge’ important?

The development comes amid growing regulatory scrutiny over cryptocurrencies which have taken a severe beating in their value since the beginning of this year. One of the biggest benefits being touted about ‘The Merge’ is that it will make transactions on the Ethereum network extremely secure.

Justin Drake, one of Ethereum’s key researchers leading the migration, explained it in Time Magazine as: “The Merge dramatically increases the security of Ethereum. An attacker needs 51% of the blockchain’s value to [take control]. With Proof of Work, you need on the order of $5 billion, which allows you to buy enough computers and transformers, connect all of them to the grid, and then carry out an attack. With Proof of Stake, we will have about $20 billion in economic security today – and this is a number I expect will grow dramatically.”

Apart from that, it is also being seen as an environmentally conscious move as Ethereum is expected to now consume 99 per cent or so less energy.

Given that some of the most popular applications of cryptocurrencies such as non-fungible tokens (NFTs) and decentralised finance (DeFi) are based on the Ethereum network, the overhaul could have far-reaching consequences in the future.

What’s next for Ethereum?

At the Ethereum Community Conference in July, Ethereum’s co-founder Vitalik Buterin had said that post ‘The Merge’, the network will undergo further upgrades which he called the “surge,” “verge,” “purge,” and “splurge”.

Surge: This refers to the addition of Ethereum sharding, which promises to process transactions on the network much faster than now. Sharding basically means dividing transactions across several different chains in a way that will decrease fees and speed up transactions. “By the end, ethereum will be able to process 100,000 transactions per second,” Buterin had said at the conference.

Verge: The verge will implement what Buterin called “Verkle trees” and “stateless clients,” which will allow users on the network to become validators without having to store extensive amounts of data on their machines.

Purge: As the name suggests, this step will involve purging old network history. “The purge: trying to actually cut down the amount of space you have to have on your hard drive, trying to simplify the Ethereum protocol over time and not requiring nodes to store history,” Buterin said.

Splurge: Buterin called this phase “the fun stuff.” It aims at making sure that the network continues to run smoothly and that the updates to the protocol in the previous sections do not cause any issues.

HIVE Blockchain: Why The Way Forward Is Promising (NASDAQ:HIVE)